Asiago PDO Product of the Mountain 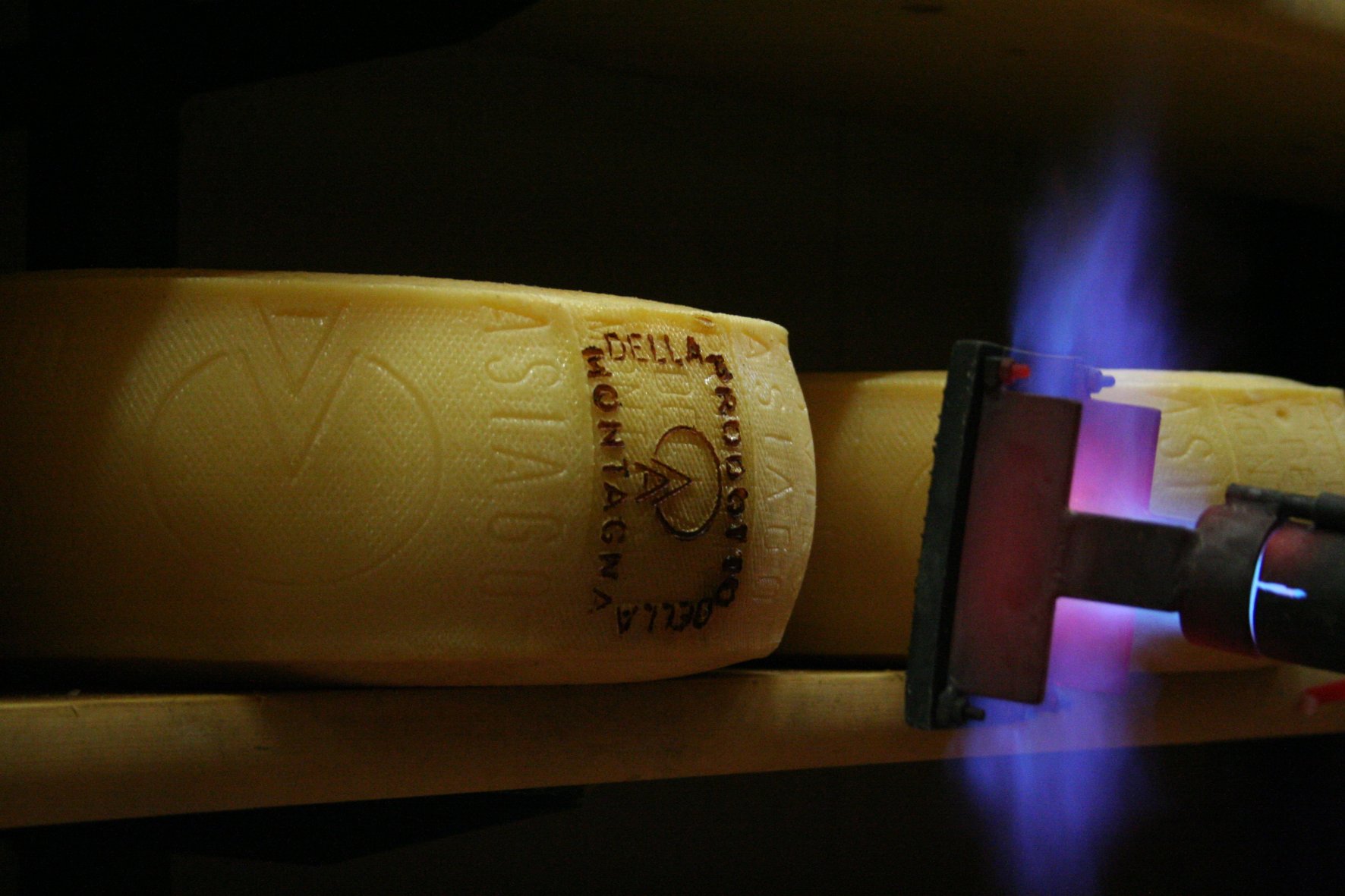 Asiago Product of The Mountain

It is the traditional cheese of the Asiago Plateau. Asiago Cheese, which boasts the name “Product of the Mountain”, is produced and aged only by cheese-makers located in mountain territory lying at an altitude of over 600 metres, according to strict production guidelines that highlight the repetition of an ancient tradition that protects the environment, grazing livestock and the consumer. The strong bond with the Alpine territory characterises the whole production chain and gives this cheese the unmistakable aromas and flavours that make it unique: sweet and pleasant in the Fresh variety, stronger with slightly piquant notes in the Aged variety. When tasted, all the different varieties of Aged Asiago are able to evoke the scent of the uncontaminated mountain meadows and pastures and the age-old tradition of cheese making.

Asiago PDO “Product of the Mountain” originates from milk produced only in mountain dairy farms and then transformed in the PDO mountain area in the Veneto and Trentino regions, at an altitude of over 600 metres, where the cows are fed mainly on grass and hay. The whole production chain, from transformation of the milk into cheese until ripening, is controlled and traced to ensure a natural product of extremely high quality. The uncontaminated environment of Alpine pastures and the great cheese-making tradition make this cheese a precious jewel of natural goodness.

Asiago cheeses that display the additional marking “product of the mountain” are recognisable not only by the marking of origin of Asiago cheese (the name ASIAGO written vertically in sequence on the edge of the whole cheese), but also by the additional wording “product of the mountain”, which is stamped, only once, on the edge.

Moreover, at the end of the minimum aging period, the cheeses are also marked using special equipment belonging to the Consortium for the Protection, which is allocated to cheese makers that meet the criteria, with the following logo fire branded on the side:

The minimum aging period of Asiago marked with the wording “product of the mountain” is 90 days from the last day of the month of production for Aged Asiago and 30 days from production for Fresh Asiago. Asiago cheese that uses the wording “product of the mountain” must be aged by cheese-makers located in mountain territory stored in buildings in which temperature and humidity conditions can be determined by natural environmental conditions.

Asiago cheese, and particularly Aged Asiago, can be considered a “natural nutraceutical” food; in other words, a food that, without additives or the use of food engineering techniques developed in the laboratory, but simply due to the raw material and production method used, has qualities that benefit human health. A group of researchers from the University of Padova has revealed these dietetic-functional properties, discovering that Aged Asiago cheese contains bioactive peptides – linked to the cheese-making method, to the microclimate in the area and to the duration of aging – capable of helping to lower blood pressure in hypertensive subjects.

The Consorzio was set up in 1979 to ensure that only cheese which complies with production regulations is sold as Asiago DOP and to promote the brand, encouraging continuity over time of both the Fresh and Mature varieties.

The Consorzio di Tutela is an association of businessmen, established pursuant to section 2602 of the Italian Civil Code and its members include dairies, cheese makers and affineurs.
In compliance with Italian Law No. 526 of 21 December 1999, it is the responsibility of the Consorzio to protect, promote and develop the brand, provide consumers with information and manage the general interests of the designations.

The Consorzio monitors the cheese from the moment the milk is collected to production in the dairies, packaging, labelling and sale. This process guarantees that each wheel of Asiago DOP cheese complies with the provisions of the Production Regulations, as well as the production process, whose traceability is guaranteed by the Consorzio itself.
The Consorzio also safeguards the designation against illegal or improper use in Italy and abroad and its duties include promoting the brand and its distinctive characteristics.
Promotion of the Asiago designation involves educating consumers and giving them accurate information about the specific nature of this great DOP production, which constitutes an important heritage for Italy's agricultural and food industry.

CLAL focus on: Asiago PDO Product of the Mountain

It is the traditional cheese of the Asiago Plateau. Asiago Cheese, which boasts the name "Product of the Mountain", is produced and aged only by cheese-makers located in mountain territory lying at an altitude of over 600 metres, according to strict production guidelines that highlight the repetition of an ancient tradition that protects the environment, grazing livestock and the consumer.