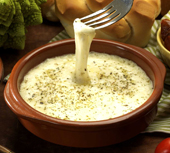 Provolone Mild with or without Spices (200 gr. portion).
It is best served grilled, fried pan, or as an ingredient for pizza or cooked in tomato sauce with garlic and other spices.

ALBIERO started producing in 1938 collecting milk from nearby areas. In 1955 Albiero built the factory in Montorso Vicentino, in Veneto Region, where Lino Albiero, the company founder, established his business activity. The early stages of their activity could be considered home made.
Over the years Albiero adapted to market needs and decided to enlarge their premises in order to increase production and offer ever improving quality, by introducing considerable technological innovation during 1984/1985 and converting of the firm from craftmade to industrialist.
The Albiero shake-up was completed in 1984 when they became part of the Valpadana Provolone Consortium.
Another shake-up took place between 90 - 92 when it was decided to take part in a EU SCHEME to improve enhance quality and to adopt the most rigorous controls starting from the first step of the supply chain. Thanks to this, new machinery was purchased and state of the art technology was implemented.
On 10.11.1998 Albiero became a certified produced of Valpadana Provolone, it issued by the CSQA with the number 072.
Albiero also obtained Certification of Quality System According to standard UNI EN ISO 9002, dated 26.07.2001.
In March 2004 Certification was renewed in line with UNI EN ISO 9001:2000.
It was issued by Certifying body Certiquality with the number 2835. Albiero opened a branch office in 2002 to increase the sales organization and a new packaging plant. During 2004 Albiero improved the capacity to produce cheese in a multifold packaging types that can cover all the trends, taste preferences, food service, industry, consumer needs school and company canteens of the world market.

Both passion and years of experience for our cheeses and continued research have resulted in the development of new diverse systems of packaging to offer to consumers all over the world the perfect aging and characteristics of the best Italian cheeses.
Our pledge will be to go on in the respect of the traditions that have accompanied the growth of Albiero in the years, keeping lively our motto "the unique taste of our tradition" that well represents the will to propose, to our exigent customers, products that can go on meeting their trust. Albiero has obtained BRC-IFS Certification in June 2010 and has renewed every 2 years. 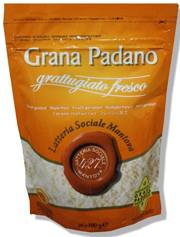 One of the most successful articles is the fresh grated Grana Padano 100 g, in the Doypack aluminium resealable bag. A captivating and functional packaging, that preserves the flavour and the quality of the product, but also easy to store and ready to use in the kitchen.